Montreal has dozens of film festivals, but it seems that there’s always room to squeeze in another one.

The Montreal International Animation Film Festival starts tonight, Thursday, April 16 and will run until Sunday, April 19, 2015. The festival will include animated features, shorts, panel discussions, a masterclass, a market AND time for partying.

The screenings and discussions will take place at the downtown campus of Concordia University; the partying will be at Restaurant Rosalie, a short walk away at 1232 de la Montagne.

Local animators taking part include Gerald Potterton, Co Hoedeman and Steven Woloshen.
The opening night film is described this way on the MIAFF web site: “The Land of the Magic Flute is a captivating browser-experience produced by the Interactive Media Foundation in Berlin. . . .sound-artist Philippe Lambert will be performing an intuitive and impressionistic rendition of his soundtrack composition. Playing with elements of Mozart’s original composition recorded by the Vienna Symphonic Orchestra, Lambert creates a soundscape that takes the opera into new spheres.”

Descriptions of some of the other feature films on the program are below.
108 Demon Kings is set in12th century China and based on the classic novel The Water Margin. It’s directed by Pascal Morelli who also directed Corto Maltese, which was a popular selection at the Fantasia Film Festival several years ago.

Aunt Hilda! (Tante Hilda!) is the botanist heroine of an ecological fable from France/Luxembourg that has genetically-modified organisms running rampant over the planet.

Hungarian film Manieggs: Revenge of The Hard Egg is about a guy who’s seeking revenge after spending two weeks in prison for a crime he didn’t commit. All the characters are said to be eggs, though they also remind me of Minions and mini-Lego characters, too. The film looks like bizarre fun, at any rate.

According to its trailer, Anima Buenos Aires is “full of art, magic and humour.” Tango music, too.

“Best of Ottawa” has nine shorts “Recommended For Mature Audiences Only” from the Ottawa International Animation Festival, “Best of Annecy”  has eight shorts from the famous festival in France, while “Best of Kanata” is a selection of 12 films by Canadian Aboriginal filmmakers.
Visit the website lemiaff.com for prices and more information. 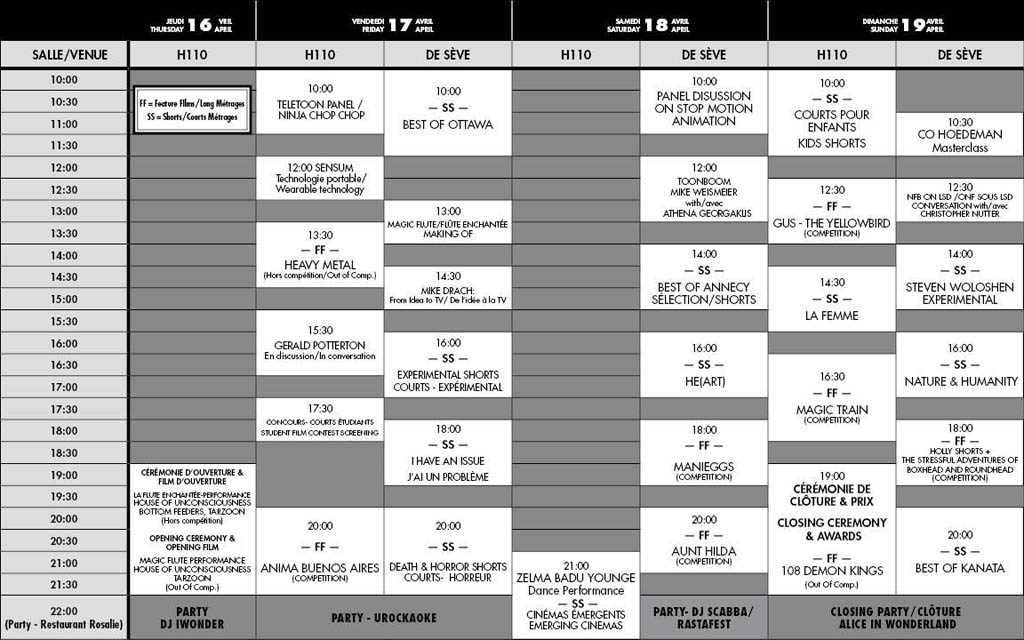