The selection for Thursday, May 26, 2016, is the Chinese film Behemoth, from director Zhao Liang.

Behemoth looks at the human and environmental devastation created by coal mining in Inner Mongolia. The landscape is scarred and ugly, while the men have blackened faces and hands. Imagine what their lungs must look like. We don’t see any chest X-rays in the trailer, but we do see them cough and struggle for breath. We see some hooked up to oxygen tanks, too.

That coal powers smoky, noisy, iron foundries and steel plants that glow with red-hot heat like a vision of hell. In fact, Zhao Liang took inspiration from Dante Alighieri’s Divine Comedy, which sees the Florentine poet travel to Hell, Purgatory, and Paradise. Behemoth uses excerpts from the poem in place of dialogue.

I have read more than 10 reviews of Behemoth and they were all extremely enthusiastic. Here are quotes from a few of them.

In the New York Times, Amy Qin writes: “documentary combines with art film to produce a powerful testament to the human and environmental costs of coal mining and consumption in China, the world’s biggest user of coal and the leading emitter of greenhouse gases from coal.”

In Screen Daily,  Lee Marshall writes: “Vast swathes of once-pristine Mongolian prairieland have, in the last couple of decades, become scarred and brutalised by open-cast coal mines, iron foundries and generating stations, with thousands of desperate Chinese migrant workers brought in to feed the insatiable demand for disposable, low-paid manpower to keep them operating. That’s the background to Zhao Liang’s remarkable, powerful film Behemoth (Beixi moshuo), a sort of ‘dream documentary’ set in this ravaged landscape but liberally inspired by Dante. Behemoth achieves much of its authority from the way the images comment wordlessly on a world in which humans are reduced to the status of servants of a vast, unfeeling industrial system.”

“. . .But it’s Behemoth’s final sequence, almost devoid of human figures, that is, paradoxically the most shocking. It shows a Mongolian ghost new-town, with its serried ranks of residential skyscrapers. These are all empty, we soon realise – as are the streets that surround them. Empty, that is, except for teams of migrant-worker street sweepers – one of whom chases after a drift of tumbleweed that has entered the shot, and tidies it away. Refreshingly undidactic, Behemoth leaves us to work out that, after hell and purgatory, this empty metropolis, made by the industrial monster that ravages the steppes, and the sweat and blood of those who serve it, is the film’s tragic, ironic heaven.”

Another Screen Daily writer, Wendy Ide, put Behemoth on her list of best films of 2015. She writes: “Behemoth (Beixi Moshuo) makes me forever grateful I write about films for a living and don’t have to pick bits of molten pig iron out of my skin at the end of each working day.” 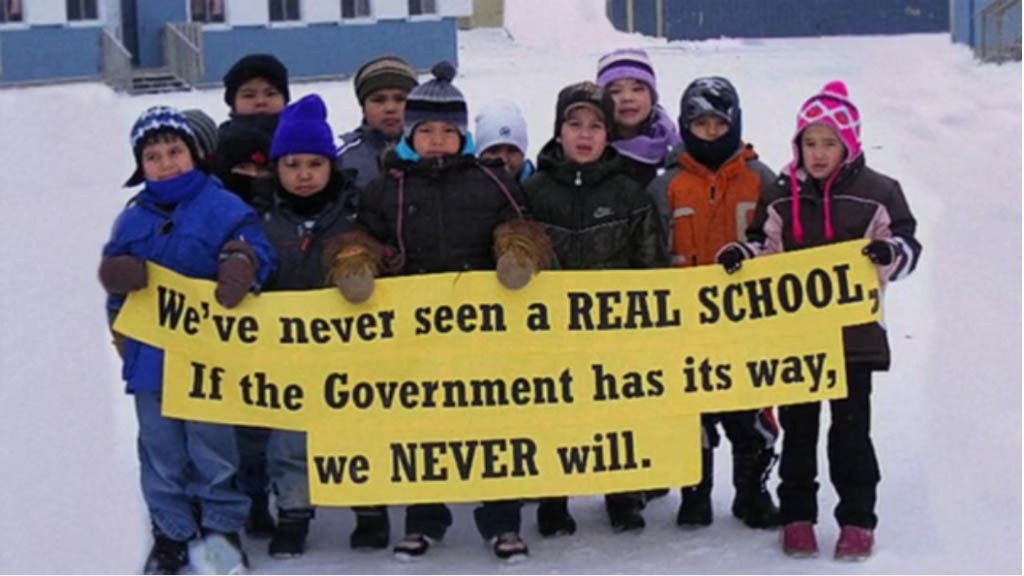 The northern Ontario town of Attawapiskat has been in the public eye a lot over the last few years, because of its housing crisis. Victoria Lean’s documentary film, After the Last River, provides a much deeper look at the situation than you’re likely to get on a nightly newscast. The stories that she tells would be interesting (and distressing) at any time, but they are particularly relevant now, as the federal election gets nearer.

Lean visited Attawapiskat for the first time in 2008. She tagged along with her father, ecotoxicologist David Lean, who had been invited there by the Cree community to share his expertise. De Beers had just opened a diamond mine in the area and residents were worried that this would lead to an increase the already high mercury levels in the local fish that were part of their traditional diet. That’s exactly what did happen.

Canadian diamonds are marketed as ethical, in contrast to “conflict diamonds” or “blood diamonds” from Africa, but an article on the Mining Watch Canada web site says “There are no clean diamonds. Exploring for them, digging them out of the ground and selling them requires sacrifices from the natural environment, from the wildlife and fish that live on it, and from the Aboriginal people who depend on it. . .The federal, provincial and territorial regulatory frameworks in Canada are inadequate to protect the environment from long term and cumulative environmental effects.” (The film informs us that the federal government weakened environmental protection legislation when it passed Bill C-38 and C-45.)

Victoria Lean returned to Attawapiskat several times over the next five years. She began making a film with an ecological focus, but as she explains in her director’s notes, “it expanded to the community’s rights to education, healthcare, housing and a clean and safe environment. One of the goals of the film is to draw attention to a number of intersecting challenges.”

Among the things we learn in After the Last River: In the 1970s and 1980s, the federal government built homes with substandard materials, and that housing has deteriorated further since then. Many homes do not have running water; residents use buckets for toilets. Some homes are plagued with black mould. In 1979, 30,000 gallons of diesel leaked under the elementary school, which remained in use, despite bad smells and students complaining of headaches. The school finally closed in 2001, and the students were moved into portables, right next to the toxic site. They had to wait until 2014 for a new school.

Relatively recent news clips from Parliament and the Ontario legislature show that both levels of government are adept at playing the old “it’s-not-my-department” game. It’s truly maddening to watch those clips, after seeing the terrible conditions that people are living in. Old news clips shot in the north show that little has changed in decades.

Residents discussing their situation with Lean say that “People in the south think that we own diamonds and we’re rich. They don’t know what’s happening here.” “We’re not rich; it’s just the land that rich.”
The mine has not improved the lives of the people of Attawapiskat. In fact, it looks like the mine has only brought benefits to DeBeers and its immediate employees.

Amazingly enough, the amount of royalties paid by DeBeers to the Ontario government is confidential. However, through diligent digging, the CBC discovered that: “the provincial government made more money on salt royalties in 2013-14 than diamonds. De Beers Canada, which owns the only diamond mine in the province, paid $226 in royalties while salt netted the province $3.89 million in royalties.” “. . .De Beers paid little or nothing for most of the seven years its Victor mine has been in production in Northern Ontario, about 90 kilometres west of Attawapiskat.”

De Beers is said to have its eyes on 15 more diamond deposits in the area.

Director Victoria Lean, producer Jade Blair and special guests will be in attendance. The screening is co-presented with the Sustainability Action Fund and Mining Watch Canada. The venue is wheelchair accessible.
For more information visit Cinema Politica’s Facebook page for this event.