The closing event of the 2015 Montreal Animated Film Festival is all about heroism.
The feature film is 108 Demon Kings. That film takes elements from the Chinese classic novel Shuihui Zhuan (known in English as The Water Margin, Outlaws of the Marsh, or All Men Are Brothers) which is based on 12th century events and first published around 1368, and adds a young prince to make it even more appealing to a young audience. (Though, what with good guys and bad guys, demons, monsters, battles, etc., it ought tobe pretty appealing already!)

The The Water Margin is sometimes compared to Robin Hood to give Westerners an idea of the flavour.

The last minute addition of two shorts emphasizes the heroic theme. They are both Canadian and one is local, too!

The local one, The Chaperone, is based on a memorable event that took place at Rosemount High School, in east end Montreal, back in the 1970s (though I don’t think the school is named in the film.) One teacher and one DJ are the only adults at a high school dance. (In a recent radio interview, one of the filmmakers said that these days there’d be 10 teachers and eight parents or something like that.)

Anyway, scary-looking members of a motorcycle gang crash the dance. Oh, oh! Teacher Ralph Whims tells DJ Stefan to lock the doors and then proceeds to teach the bikers a lesson, so to speak, using chairs, fists, feet, etc. Just like in the movies! But it really happened! The film uses thousands of crayon drawings, puppets, stop-motion animation scenes showing the outside of the school, passing traffic, and the eventual arrival of police cars, shreds of paper from the explosions of dozens of pinatas, an hilarious live-action segment inspired by B-movies, AND a cheesy (in a good way) soundtrack inspired by blaxploitation films. There are some 3D parts, too. In other words, a bit of everything. It’s truly quite amazing. I watched it at home without the benefit of the 3D aspect, I’m sure it will be even more mind-blowing on the big screen. The film is made by Fraser Munden and Neil Rathbone. Fraser Munden knew the story well, because his father had been one of Ralph Whims’s students.Here’s a link to an article in Spectacular Optical about The Chaperone. 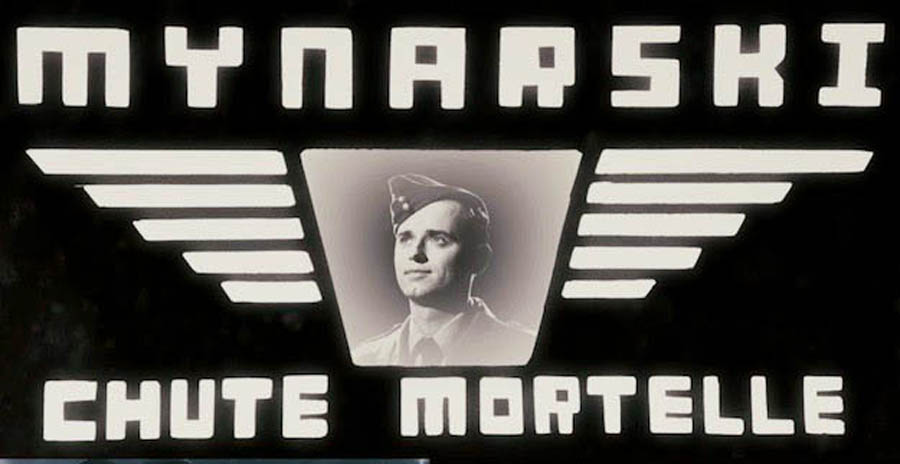 The other Canadian short is Mynarski Death Plummet. It’s about Andrew Mynarski of Winnipeg, a gunner with the Royal Canadian Air Force in World War II. On June 12, 1944 his plane was badly damaged by gunfire and everyone was ordered to don their parachutes and jump from the burning plane. But Mynarski struggled through the flames to try to free tail gunner Pat Brophy, who was trapped at the back of the plane. This film blends live action and animation and ends with a fantastic creation unlike anything else I have ever seen before. The film contains 21,000 hand-painted 35 mm frames!

“This is such a great film. I could have watched all seven minutes of it if they’d somehow been elongated to a Dreyer-like pace and spread out over 90 minutes. That said, it’s perfect as it is. The fact that you don’t want it to end is a testament to director Matthew Rankin one of the young torchbearers (along with Astron-6) of the prairie post-modernist movement which hatched out of Winnipeg via the brilliantly demented minds of John Paizs and Guy Maddin. Blending gorgeously arcane techniques from old Hollywood, ancient government propaganda films with dollops of staggeringly, heart-achingly beautiful animation – bursting with colour and blended with superbly art-directed and costumed live action. . .”

108 Demon Kings, The Chaperone, and Mynarski Death Plummet are part of the Closing Ceremony and Awards Presentation of 2015 Montreal Animated Film Festival.
The event begins at 7 p.m., Sunday April 19, 2015 in H-110 of the Hall Building of Concordia University, 1455 de Maisonneuve W.
Visit the website lemiaff.com for prices and more information.