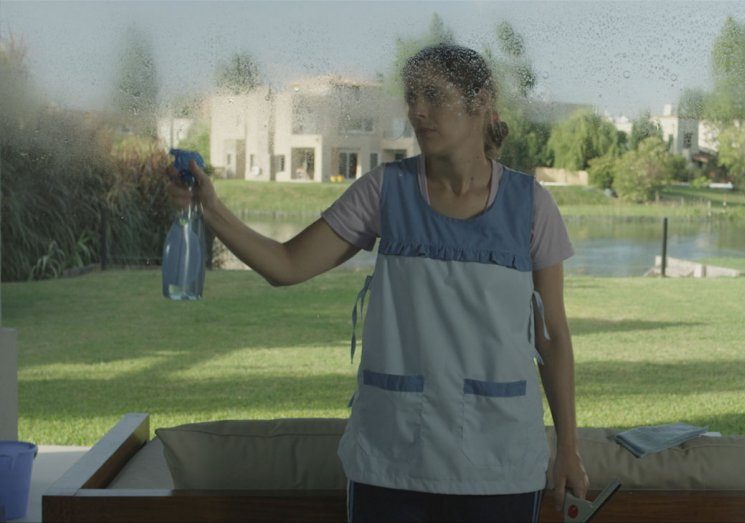 A Decent Woman was shot in Argentina. The original Spanish title is Los Decentes. It has also been shown under with the English title The Decent. It’s a satire.

Belen is a woman who does not say much. She observes, sometimes warily.

Belen (Iride Mockert) starts working for a rich woman and her spoiled son in a gated community outside Buenos Aires. (The residents inside those gates are wealthy, but in the surrounding area there are rundown streets littered with garbage.) Belen’s employer has a large house, but it presents a blank face to the world – it doesn’t look particularly comfortable or welcoming. It’s very bland, lacking personality, inside and out.

The property is on the far edge of the community and Belen soon notices that there is a nudist colony on the other side of the big hedge, and the (highly-)electrified fence. (She notices because she does everything at that house, buying groceries, washing floors, windows, dishes, doing laundry, cleaning the son’s sport shoes, and clipping that hedge. Belen’s employer, Diana (Andrea Strenitz) signs Belen up for cooking classes, too. (Among other things, they make cupcakes – a “very American recipe” according to the instructor.) When Diana can’t sleep, she wakes Belen to keep her company.

After days, maybe weeks, of watching the nudists, Belen lets her long hair down (literally), sheds her clothes and joins them. When they first see her, she is shyly recreating the pose from Botticelli’s Birth of Venus (the one with the big seashell).

They’re a very welcoming bunch and soon Belen is spending lots of time with them. Is this possible because Diana and her son, Juanchito, go away a lot for tennis tournaments, or could it be that Belen is just imagining herself having a different way of life with these people?

Much of the time, they are calm, quiet and relaxed, hanging out in or beside the water, dozing or reading. I won’t describe all of their activities, to avoid the accusation of “spoilers!” Let’s just say, this isn’t a “family-friendly” nudist club, and the place where the scenes were shot is actually a nudist swingers’ club, in the director’s own words.

The nudists do play loud music at night. It’s so loud that Diana’s windows vibrate and she can’t sleep. Other neighbours are upset about them, too, and they start a petition against the enclave.

Up until this point in A Decent Woman, I had no serious complaints. It had been moving at a  languid pace, possibly too slowly for some people, but I could handle it. (I did not notice anyone leaving, either.)

But. . . call me a coward or whatever, I did not like the abruptness nor the content of the ending. One or two people laughed. Was it serious laughter or nervous laughter? I wonder. I prefer to think that director Lukas Valenta Rinner did not know how to end the film, or that the ending is a dream that Belen has. (Yes, I know, dream sequences are a corny cliché.)

One person near me said “If I had known it would be like that, I would not have come.”

(I went to A Decent Woman  because I thought that I had read several rave reviews about it, in reports from other festivals like Sarajevo and TIFF. Maybe I got it mixed up with something else.

The FNC catalogue and web site say that director Lukas Valenta Rinner also made Parabellum, which explains a lot. My brain must have skipped right over that. (Did you see it?) If you intend to see A Decent Woman, it might be better not to read about Parabellum beforehand.

As for not knowing how to end it, Parabellum won a prize at the Jeonju International Film Festival in South Korea. A few months later, the Jeonju Cinema Project offered Valenta Rinner money to make his next film, but that meant he only had six months to write, film and edit a work-in-progress version to show at the next edition of the festival.

On the other hand, in an interview with Cineuropa, Valenta Rinner indicates the abrupt ending was a “deliberate narrative decision,” to provide catharsis. And now that I think about it, abrupt changes of tone happen all the time in Korean cinema.

Lukas Valenta Rinner is an Austrian who went to film school in Argentina and still lives there. He has stated that his film is a comment on inequality and social tensions in Argentina. I’ve watched many films from Argentina, but I’ve never been there, so what do I know?

Final verdict: Mixed feelings. Can’t say I’m happy that I went, but I don’t feel ripped off either. I wouldn’t recommend it to everybody, but I imagine there are people within my extended circle who would like it.